Lucario is a fourth generation Pokémon, being a dual Fighting and Steel-type.

Lucario is the Aura Pokémon, and the final evolutionary stage of Riolu. Lucario is considered to be prideful, and is extremely loyal to its Trainer. It also seems to have a natural sense of justice. It usually lives deep in mountains very far from people to improve their skills. It is an exceptionally rare Pokémon. A Lucario is believed to have been the first Pokemon to acheive Mega Evolution. Notable Lucario have belonged to Sir Aaron, Riley, Maylene, Cameron, and Korrina.

Lucario's Mega Evolution, which can only be activated by a Trainer who has a strong bond with Lucario, a Key Stone, and the proper Mega Stone. While Mega Evolved, all of Lucario's stats but HP and Special Defense gain large buffs. The black streaks covering Mega Lucario's body are where the energy of Mega Evolution raced through its body, and its fighting style has been described by those who've seen it as heartless. Mega Lucario is thought to be the first Mega Evolution discovered. 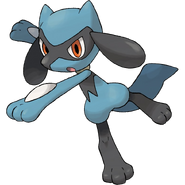 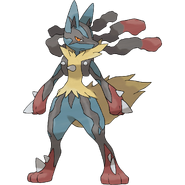