Akuma is a playable character and major antagonist in the Street Fighter series. He is known as "The Supreme Master of the Fist". He first appeared as a secret character in Street Fighter II Turbo.

In order to learn Shun Goku Satsu, Akuma embraced the principle of Satsui no Hado, and was forced to give up any compassion he held towards other human beings. In addition, Akuma realized his limits as a martial artist could be expanded, and left Goutetsu's guidance of enlightenment to train alone to gain more power. However, due to embracing the Satsui no Hado to its fullest extent, he developed a lust to fight to the death, unlike Goutetsu, who had been able to use the Satsui no Hado without giving in to its dark side.

His personality remains more or less the same as the original. Essentially, he is Akuma using the fullest extent of his power. However, he is more competitive in battle and less merciful when he is fighting a strong warrior. He will only fight at his true potential when he has found an equal to do battle with. All of his attacks do more damage, and come out faster.

Due to his training and meditation, Akuma may have suppressed some of the darker aspects of the Satsui no Hado, allowing him better control his actions, but if something breaks his focus, it can trigger a reaction that forces him into his Oni form. As Oni, he finally becomes one with the Satsui no Hado, whose power has now managed to completely overtake him. It has been hinted by Rose, that this form is eventually who Akuma will be for the rest of his life. In this form all of his attacks are far stronger than even his Shin Akuma form, and his Raging Demon becomes invulnerable to harm.

Akuma becomes mechanically enhanced by Apocalypse; the enhancements include a mechanical right arm (dubbed Booster Rocket), metal wings, and four extra arms that are only seen in one of his win poses. As such, his personality is vastly different from that of Akuma's, being more servile (as reflected in his win quotes.) however, as a fighter, Cyber Akuma fills the same role as Shin Akuma.

By becoming one of Galactus's heralds Akuma has access to the Power Cosmic. This allows him inter-galactic space flight in order to search out planets for consumption by Galactus. He does not need to breathe, eat or rest and has the very super powers that put the Silver Surfer on the same level with some of Marvel's Universe's most powerful beings.

Akuma as he appears in Street Fighter II Turbo

Akuma as he appears in Street Fighter Alpha

Akuma as he appears in Street Fighter IV

Akuma as seen in X-Men vs Street Fighter 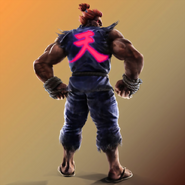 Akuma as he appears in Tekken 7 Fated Retribution

Community content is available under CC-BY-SA unless otherwise noted.
Advertisement